Before enrolling your child at a school, you’ll have to decide whether to send them to an international school or ‘go Dutch’. Both have their own advantages. In this article we’ll explore the differences.

Length of stay in the Netherlands

If you are planning to stay for a period of 2-3 years, an international school ensures a greater sense of continuity.

If you are staying longer, and would like to mix with the local culture, you may prefer a Dutch school. 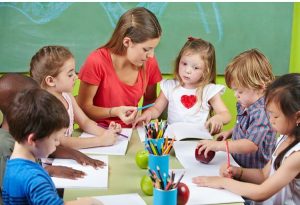 4- and 5-year-olds who don’t speak Dutch can usually start at a regular Dutch school straight away, as they normally become fluent enough before formal reading and writing starts at age 6.

Foreign children aged 6+ are usually required to follow a one-year newcomer program, after which they can join a regular school with children the same age.

Uniquely, among the state-funded Dutch schools there are some religious schools (Catholic, Protestant, Islamic, Jewish) or those that follow specific pedagogic principles (e.g., Montessori, Waldorf, Dalton). All schools are obliged to adhere to the government’s ‘core objectives’, which specify the basics all schools need to teach each year.

The Dutch school attendance law is very strict. From age 5, your child is only allowed to miss school for very specific reasons, e.g. a family emergency or important celebration. International schools are often a bit more flexible in allowing their pupils to take time off during term time, although absences due to extended vacation or early departures at vacation times are usually strongly discouraged.

The summer vacation in Dutch schools lasts six weeks. During the school year, there is at least one week of vacation after each period of about six weeks, so that both pupils and teachers can recharge their batteries. International schools either follow the vacation periods of the country they are related to, or set their own schedule. Pupils at international schools usually enjoy longer summer breaks than their Dutch peers, but often don’t have the frequent breaks throughout the year, and their school days are normally longer. 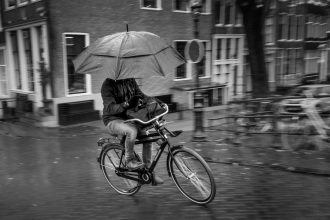 Most Dutch schools are neighborhood schools. Pupils often play with their classmates after school, which they usually arrange themselves.

At Dutch schools, though, it may take more time and effort for international parents to understand what is going on and to make friends compared to international schools, where everyone is in the same boat.

On the other hand, international school families leave on average within 2-3 years; children staying longer frequently have to make new friends. The majority of international pupils live relatively far away from school, which makes the logistics more complicated and expensive.

You don’t have to speak Dutch to enroll your children at a Dutch school, but it certainly helps. Most elementary schools don’t give homework till the higher classes, so you won’t need to worry about not being able to help your child.

Before choosing a school, make sure you understand the school’s approach and experience with non-Dutch families, as this can vary greatly.

At Dutch schools, the pupils take the ‘Central End Test for Primary Education’ in the last year of elementary school (ages 11 or 12). This is a standardized aptitude test with questions testing their Dutch language and comprehension skills, mathematics, study skills, and (optionally) world orientation.

Before this test takes place, the teacher assesses what level of high school education (see below) would fit each pupil best. They base their recommendation on various factors, including the pupil’s test scores from lower classes, intelligence, attitude towards learning, eagerness to learn and interests. The assessment of the teacher is the deciding factor.

Children who have lived less than 4 years in the Netherlands don’t need to take the end test. In this case, the teacher will give the advice for the best-suited level of secondary school. 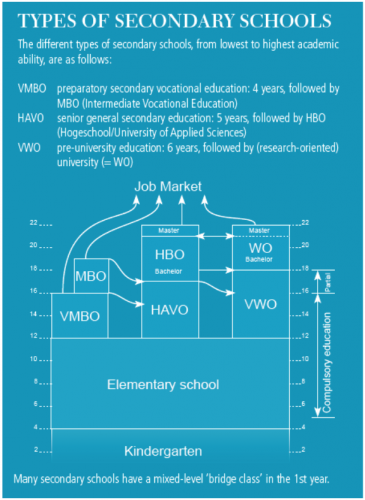 Diagram based on Wikipedia: https://en.wikipedia.org/wiki/Education_in_the_Netherlands

Secondary education generally continues till the ages of 16–18, depending on the level. After obtaining a diploma from one level (for example HAVO), you may proceed to the final years of the next level (VWO). Likewise, after completing HBO you may continue to university.

For some university courses in the Netherlands, you can only enroll if you have followed a particular program during the last years of high school, for example Culture & Society, Economics & Society, Nature & Health, or Nature & Technology.

Most universities worldwide accept students with a VWO diploma. Sometimes they have additional requirements, for example proficiency in the local language and/or having passed the VWO exam with high grades. Higher education is offered at a high standard in the Netherlands; all 13 state-funded Dutch universities score well in The Times Higher Education World University Rankings.

The four programmes of the International Baccalaureate® (IB)

International schools at secondary level often offer the IBMYP (ages 11–16) and IBDP (ages 16–19) curriculums. The IBDP is a globally recognized high-standard diploma, usually valued at the same level as a Dutch VWO diploma, and gives access to research-oriented universities around the world.

It is possible that a Dutch university requires proof of Dutch language proficiency, and/or a pass in a certain subject examined at secondary level.

There are plenty of courses at Dutch universities that are offered completely in English, but some professional degrees, for example for Medicine and most Law studies, you can only attain in Dutch. So, it helps to make your future plans well in advance.

The available studies in English you can find here:

Also, although the IBMYP program could be compared with HAVO, most Universities for Applied Sciences (HBO) don’t value the former as highly, since often an official diploma is not awarded at the end of the MYP.

As you can see, there is a lot to consider. Whatever school(s) you choose for your children in the end, I hope they have a happy and successful time in the Netherlands!

Could you use some independent and personal advice to decide which school would suit your family best?

Book a video call with New2NL

for more information, get in touch